Latvia’s representative offices abroad issue uniform, Schengen visas, valid in the territory of all Schengen signatory states – this means that with a visa issued at a Latvian Embassy you can enter other Schengen countries. There are no border controls between countries that have signed and implemented the treaty. Likewise, a visa granted for any Schengen member is valid in all other countries that have signed and implemented the treaty. But be careful: not all EU members have signed the Schengen treaty, and not all Schengen members are part of the European Union.

Airports in Europe are divided into “Schengen” and “non-Schengen” sections, which effectively act like “domestic” and “international” sections elsewhere. If you are flying from outside Europe into one Schengen country and continuing to another, you will clear Immigration and Customs at the first country and then continue to your destination with no further checks. Travel between a Schengen member and a non-Schengen country will result in the normal border checks. Note that regardless of whether you travelling within the Schengen area or not, some airlines will still insist on seeing your ID card or passport.

Keep in mind that the counter begins once you enter any country in the Schengen Area and is not reset by leaving a specific Schengen country for another Schengen country, or vice-versa. 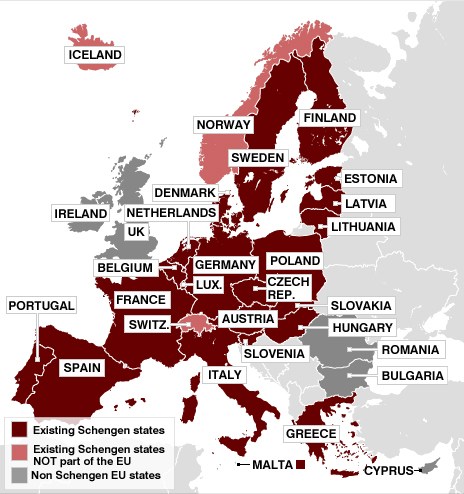 To be able to enter the Schengen Area without a visa, the above Annex II nationals are required to have a travel document which is valid for at least 3 months after the intended date of departure and which has been issued in the previous 10 years, have sufficient funds for their stay and onward/return journey, justify the purpose and conditions of their stay, not be listed in the Schengen Information System as someone to be refused entry and not be considered as a threat to public policy, internal security, public health or the international relations of any Schengen country.

Further note that
¹ Citizens of Bosnia and Herzegovina need a biometric passport to enjoy visa-free travel
² Serbian nationals with passports issued by the Serbian Coordination Directorate (Serbs residing in Kosovo) still do need a visa.

All visitors from outside the EU, including Americans, must fill out a landing card, available on board some arriving flights (sometimes) or in the entrance hall of the airport from the small box between the customs agents.

The period of stay in Latvia without a visa is 90 days in half a year, counting from the arrival day. If you wish to extend your stay beyond the 90 days in half a year, then you have to apply for a residence permit. More information on entry into Latvia can be obtained on the website of the Ministry of Foreign Affairs of Latvia and on the website of the Latvian State Border Guard.

Disclaimer: The information above is intended to assist conference attendees with their travel arrangements. Each individual traveling to the conference is responsible for researching all requirements necessary for entry to Latvia specific to his or her case. ESWI has no influence on an individual’s application to a Latvian Embassy or any other agency for a visa to travel to Latvia and cannot be held responsible for the outcome of an individual’s visa application.

This site uses cookies. By continuing to browse the site, you are agreeing to our use of cookies.

ESWI uses cookies on www.eswi.org (the "Service"). By using the Service, you consent to the use of cookies.

How ESWI uses cookies:
When you use and access the Service, we may place a number of cookies files in your web browser.
We use cookies for the following purposes: to enable certain functions of the Service, to provide analytics and to store your preferences.
We use both session and persistent cookies on the Service and we use different types of cookies to run the Service.

What are your choices regarding cookies:
If you'd like to delete cookies or instruct your web browser to delete or refuse cookies, please visit the help pages of your web browser.
Please note, however, that if you delete cookies or refuse to accept them, you might not be able to use all of the features we offer, you may not be able to store your preferences, and some of our pages might not display properly.

These cookies are strictly necessary to provide you with services available through our website and to use some of its features.

Because these cookies are strictly necessary to deliver the website, you cannot refuse them without impacting how our site functions. You can block or delete them by changing your browser settings and force blocking all cookies on this website.

These cookies collect information that is used either in aggregate form to help us understand how our website is being used or how effective our marketing campaigns are, or to help us customize our website and application for you in order to enhance your experience.

If you do not want that we track your visist to our site you can disable tracking in your browser here:

We also use different external services like Google Webfonts, Google Maps and external Video providers. Since these providers may collect personal data like your IP address we allow you to block them here. Please be aware that this might heavily reduce the functionality and appearance of our site. Changes will take effect once you reload the page.